Learning to be flexible with 2020 obstacles 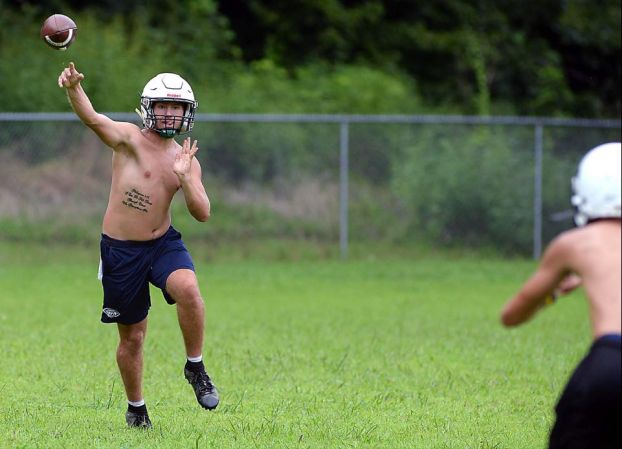 Putting the 2019 season behind him has helped drive Harlan quarterback Connor Scearse as he prepared for his senior year.

Scearse was limited to only five games during Harlan’s 1-10 campaign last year. He passed for 250 yards in 2019 with one touchdown and one interception as various injuries made it impossible to develop any consistency.

“It was pretty aggravating. First, we were doing a toss drill in practice and I came down on my shoulder and separated it. I battled through it the first game,” Scearse said. “Then, I’m feeling pretty good in week two against Phelps and we played them really tough. I was feeling good in week three, then I broke my arm in the third quarter and spent most of the rest of the year trying to get back.”

Scearse was able to work his way back for the last two games of the season.

“I’m sure it was tough on him mentally,” Harlan coach Eric Perry said. “But he stayed the course and was at practice every day supporting his teammates. He worked hard to get back, and I think that was good for him to be able to finish the season.

“It felt good to get back those last two games and get to play again with my brothers,” Scearse said.

Like all high school athletes around the state, Scearse has had to deal with the possibility that he may not get to play this fall due to the coronavirus pandemic.

“It’s been pretty tough,” he said. “Nothing is guaranteed right now, but we are just practicing like we are going to play. That’s all you can do.”

Perry said improved leadership from this year’s seniors is one of the bigger reasons why he believes the Dragons can improve on last year’s performance.

“I think we have good leadership with these seniors, and even some of the juniors. Practice has been so good,” said Perry.

“The seniors have been close since we were young. We’ve played together since grade school and worked hard,” added Scearse. “We’re trying to get the younger guys ready. I really feel we can turn things around and win some games.”

Perry has been impressed with Scearse’s work in the offseason to improve himself.

“He has gained probably 10 pounds of mass and is much stronger for sure,” Perry said. “He has looked good at running our offense, along with Cade (Middleton) and Ethan (Clem) looking good as well. Where I have been even more impressed is how much more physical he seems both running and at the linebacker position. We really need Connor to be a leader for us this season. I think he has really enjoyed the zone read stuff as we have really expanded on that this preseason.”

The Dragons opened the season on Sept. 11 at home against Middlesboro. Scearse is looking forward to what he hopes will be an injury-free season.

“I feel pretty good about this year. I’ve put in a lot of work, and I can tell I’ve improved throwing the ball,” he said. “I feel good about our chances this year.”