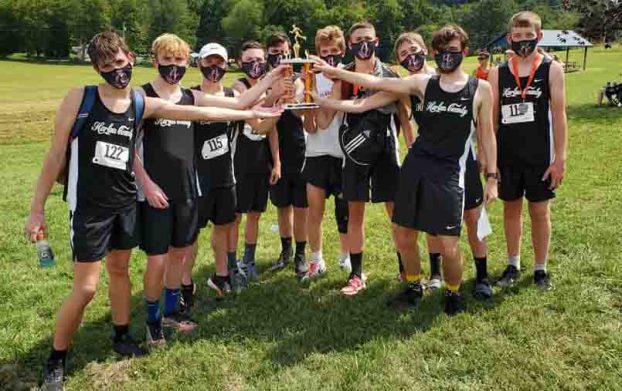 The Harlan County Black Bears are pictured with their trophy after placing second in the season-opening meet Saturday at Lynn Camp. The HCHS girls also placed second. (Photo submitted)

Harlan County finished second in both the boys and girls divisions in the opening cross country meet of the season Saturday at Lynn Camp.

Corbin won the boys race with 30 points. HCHS was next with 78 points, just ahead of Western Hills with 86 points. Bell County was fourth with 96 points and was followed by Whitley County with 120, Lynn Camp with 134, Williamsburg with 140 and Middlesboro with 217.

Corbin also won the girls race with 31 points. Harlan County was second with 68 points, five ahead of Middlesboro. Lynn Camp was fourth with 92 points, followed by Williamsburg with 97 and Whitey County with 142.

“I’m very proud of both teams,” Harlan County coach Ryan Vitatoe said. “It was hot today, but they all ran well. I told them coming in that I wasn’t really concerned with anyone’s time, I was more focused on effort.  It’s hard to really look at times, considering the pandemic cost us four or five weeks of preseason practice.  I was more concerned with seeing if their competitive effort was where it needed to be.  Overall, I was pleased.  To come out of here with a trophy and beating a team the caliber of Western Hills was a nice surprise.  However, we also see we have a very long way to go to be competitive on a larger scale.”

“The girls also ran well,” Vitatoe said. “For the most part, I felt like they all ran hard. We had a few that nerves got the best of them, but nearly every girl competed.  I’m really excited about this group. I think they have a lot of potential to be very, very good, once they learn how to race. I think they have a really high ceiling.

“This was a great meet to use as a measuring stick. Corbin is the program to watch in our region with all their success in the last year. This meet shows where we currently are and how much work it will take to be competitive. We have to stay positive, keep working hard, keep focusing on being good teammates, and I think good things can follow.”

Harlan County will return to action Tuesday in a meet at the HCHS course that will also include Harlan, Letcher Central, Bell County, Middlesboro and Leslie County.