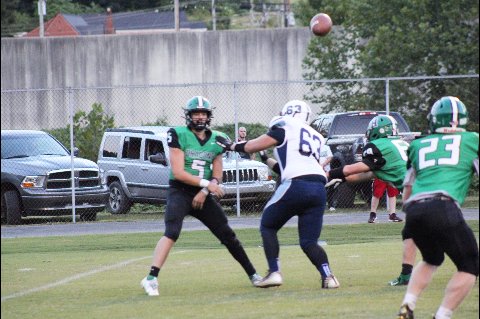 Harlan quarterback Cade Middleton passed to Jayden Ward for yardage in Friday's game against East Ridge. The Dragons rallied from a 22-0 deficit to edge the Warriors 46-40. (Photo by Megan Freyer)

By Special to The Harlan Enterprise

After one quarter of football at Joe Gilley Athletic Complex on Friday evening, the Dragons found themselves down 22-0 to East Ridge.

Like many times before, Gilley, J.B. Donahue and several others fought back to win.

That was the case last week for coach Eric Perry and his team.

“Great win for our program,” said Perry. “I think we really grew tonight and came together as a family.”

“Jayden is such a hard-working kid who just wants to win. I will take 11 Jayden Ward’s on my squad any time,” said Perry

“Cade was spectacular in his performance, which was not really that surprising because he is very capable of those kind of outings. He is a special athlete,” Perry said.

East Ridge junior quarterback Dylan Burdine completed 19 of 27 passes for 339 yards. He rushed for 111 yards on 17 carries. The Warriors gained 176 yards on the ground. Brad Howell had six receptions for 130 yards, while Isaiah Adkins caught six passes for 94 yards.
Burdine found Howell for a 72-yard touchdown pass with 8:03 left in the opening quarter. Burdine’s run made it 8-0.

Three minutes later, the QB scored on a 1-yard run.

The first-period closed as Burdine connected with Isaiah Adkins for a 25-yard TD pass. Nathan Martin added the two-point conversion.

“We dug ourselves a hole quickly being behind 22-0,” said Perry. “We looked lost in pass coverage, which still has me scratching my head, but the kids just kept digging and clawing.”

Harlan’s first touchdown came in early in the second quarter, thanks to a fake punt by Dylan Middleton on fourth-down-and-10 on the Warrior 49. Middleton took the snap and raced 22 yards.

Two plays later, Cade Middleton scored on a keeper from the 16 to make it 22-6.

The Dragons used an 11-play, 60-yard drive to score again with 24 seconds remaining in the half. Cade Middleton scored on a 1-yarder.

On second-down-and-7, Cade Middleton raced 54 yards for a touchdown with 6:36 remaining in the quarter. Cade Middleton’s 2-point conversion was good as Harlan pulled within 28-20.

Harlan’s onside-kick was perfect as the Dragons recovered on their own 45. Three plays later, Ward scrabbled 41 yards for a score. HHS trailed 28-26.

The Dragon defense held East Ridge on downs and took over on the Warrior 42 with 3:38 to play in the third period. A 10-play drive was capped by Cade Middleton six minutes on a 1-yard run as Harlan took a 32-28 advantage.

The Warriors regained the lead (34-32) as Burdine connected with Howell on a 21-yard TD pass. The clock showed 7:34 remaining.

East Ridge tried to use the clock to its advantage as the Warriors covered 60 yards on 10 plays to find the end zone. Burdine capped the drive with a 2-yard run with 1:31 on the clock.

The winning drive started on the Harlan 45. On second down, Cade Middleton connected with Will Austin for a 19-yard pass. Following another pass, this time to Evan Browning for 27, gave the Dragons the ball on the 7.

On third down, Cade Middleton went in from the 5 while Ward added the two-point conversion.

Harlan (2-1) returns to action Friday at home against Middlesboro (4-0). The Dragons will visit Lexington Sayre on Sept. 24. East Ridge (2-2) travels to Prestonsburg (2-2) on Friday. 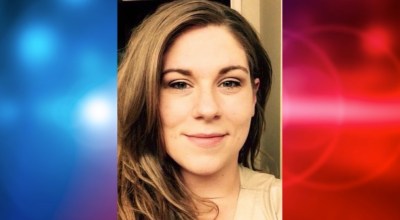 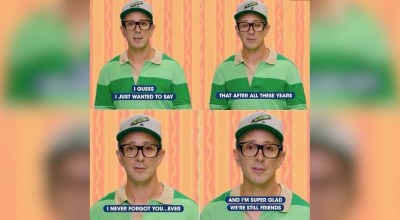 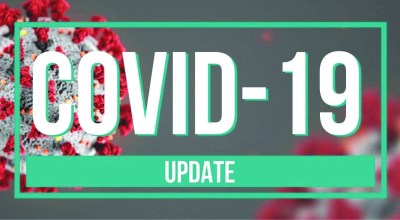 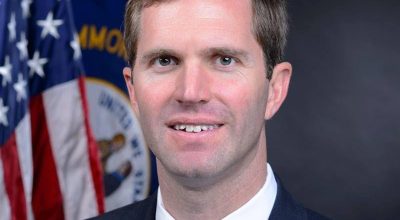